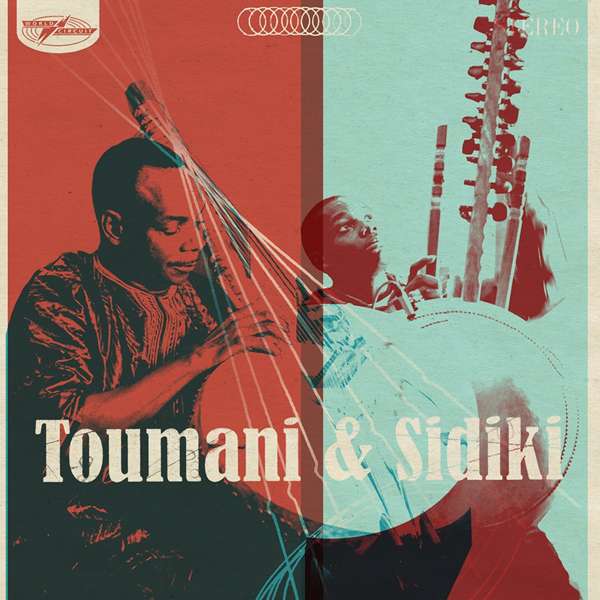 In a rare father-and-son collaboration, Toumani Diabaté, genius of African music and widely recognised as the greatest living kora player, has recorded an album of duets with his son Sidiki, the instrument’s emerging star.

Described as “the finest Toumani collaboration since his classic work with Ali Farka Touré” (The Guardian) ‘Toumani & Sidiki’ is a dialogue conducted through the kora, the 21-string West African harp which the Diabaté dynasty has elevated into the most iconic of African instruments. Father-and-son collaborations are rare enough but the ties binding Toumani and Sidiki Diabaté are particularly profound and evocative. Descended from a line of griots - custodians of the ancient oral traditions of West Africa’s Mandé people stretching back seven hundred years - the names Toumani and Sidiki are significant names in the annals of African music.

Toumani’s father, Sidiki senior, recorded the first ever kora album, the classic Mali: Ancient Strings, in 1970, unwrapping the instruments potential as a virtuosic lead instrument. His son Toumani has taken it further, weaving together bass lines, ancient melodies and astonishing improvisations to create a kaleidoscope of musical colours. Since recording the first solo kora album in 1988, he has brought the instrument to the world, with albums, tours, GRAMMY awards and collaborations with the likes of Ali Farka Touré, Taj Mahal, Herbie Hancock, Damon Albarn and Bjork. Toumani has also built an impressive array of fans along the way, including President Barack Obama, who chose Toumani’s collaboration with Taj Mahal as his all-time favourite album.

Toumani’s eldest son Sidiki moves things forward again. In Mali’s capital Bamako the 23 year old is a star. Voted Mali’s best beat maker in 2013, Sidiki runs his own recording and programming studio and alongside rapper ‘Iba One’ is one half of the country’s premier hip-hop duo, who fill the 20,000 seater Modibo Keita stadium. At the same time he has a deep knowledge of Mande culture and a formidable technique on the kora. “It’s a dream to play with my father” he says. “Yes I’m a hip-hop artist, but I love and respect my roots as a kora player, I want to know more. It’s my chance to learn directly from my father. It’s extra special because my father is my idol.”

The album is a set of unaccompanied kora duets, recorded with little rehearsal (and for some songs no rehearsal) as ‘live’ with no overdubs at RAK studios north London. World Circuit’s team of producer Nick Gold and engineer Jerry Boys (Ali Farka Touré, Buena Vista Social Club, Orchestra Baobab) is complemented by co-producer Lucy Duran (producer of Toumani’s previous albums). Recorded in stereo Toumani can be heard in the left speaker and Sidiki on the right.

The repertoire is based on a combination of obscure, almost forgotten kora pieces and a new look at some Mande classics from Mali. “We’re not going backwards, trying to play just how my father and grandfather did these songs,” says Toumani. “We have to do it our way. We’re modern griots, we live in the city, we’re connected to the world. Speaking of his desire to transmit ancestral repertoire in a contemporary manner Toumani describes the album as ""The past meets the present for the future.""

The album arrived in the wake of the recent hard-line Islamic insurgency where a ban on music was attempted in the north of Mali. With this album Toumani wanted “to show the positive side of Mali”, to reassert the legacy of a country with access to untold musical riches. The songs are named, in griot tradition, to honour various people, places or events.

The playing is extraordinary. There is telepathic communication, the finishing of each other’s musical sentences - dazzling musicianship. The kora is the quietest of instruments but is here played with verve and attack, groove, wit, swing and bounce, ecstatic excitement and exquisite intimacy. And always with a flowing pulse and groove. ‘Toumani & Sidiki’ sounds unlike any other album of kora duets.